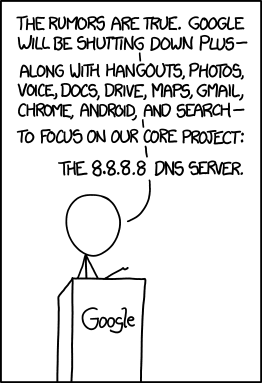 Site deaths are when sites go offline, taking content and permalinks with them, and breaking the web accordingly. Site deaths are one of the big reasons why you should own your own identity and content on the web.

This is a chronology of content hosting sites that have died, removing millions (billions?) of permalinks from the web. This is specifically for content hosting sites which permitted end-user posting. Not random sites nor pure "app" sites where there's no loss of user data. If a game site goes down and takes down play history/scores, or if Gmail went away those would both represent loss of user data (though no public permalinks).

The tendency for big companies to shut down a service and delete all your things has now even been satirised by XKCD. Andy Baio talks through one example from creation, to growth, acquisition, acquihire, disillusionment, neglect, and shutdown.

Short link to this page:

Available to Business G Suite accounts, users can create a project as easily as creating a Google Doc or Google Sheet. On January 27, 2020 Google has announced the termination of this service due to low usage.

Yahoo has made the decision to no longer allow users to upload content to the Yahoo Groups site. Beginning October 28, you won't be able to upload any more content to the site, and as of December 14 all previously posted content on the site will be permanently removed. You'll have until that date to save anything you've uploaded.

The Yahoo Groups site will continue to exist, however, all public groups will be made private or restricted. Any new group members will need to request an invite or be invited by an admin. Admins will still be able to manage various group settings, though some functionality will be limited.

Photos and files can be saved right from the Yahoo Groups site, or you can download your data from the Privacy Dashboard.

These sites are officially closed, but some functionality may still be working (e.g. logging in and viewing your activity).

The announcement of an acquihire or other exotic corporate acquisitions by silos or other companies may, but does not necessarily, indicate a potential future site-death. Exporting your personal data from these services may be a good preventative measure against potential future data loss.

This is an incomplete list. Please help by adding examples from these sources (in particular when user authored content was lost):

See also (and add one-line summaries to) the history page.

Sandstorm was enables non-technical end users to install and run arbitrary software on servers they control. Apps could downloaded from an app store and installed with one click, like installing apps on phone. Each app was running in a secure sandbox, where it could not interfere with other apps without permission.

Sandstorm shutdown beacause team was forced to look for new jobs. Most of them were hired by Cloudflare, though some chose to go elsewhere.

2019-03-30: CiteULike announced on 2019-02-19 that they will be shutting down their education-related social bookmarking service.

Unfortunately, the costs associated with providing it and the fact that none of us really has any time to put into the maintenance and development of the site mean that we have to call it a day.

After 4 years, we have made the hard decision to end our ZCast journey.

ZCast will run in minimal capacity between now and the end of January 2019, and will then shut down indefinitely.

I decided to stop Unixcorn, I'm tired and weary about the hypocrisy of presenting the project as a collective one. I took care of it alone for years and now I want to let go and go on. https://unixcorn.xyz/@unixcorn/100661173664470093

It is with deep regret that we announce that we will stop providing our beloved service, Path.

We started Path in 2010 as a small team of passionate and experienced designers and engineers. Over the years we have tried to lay out our mission: through technology and design we aim to be a source of happiness, meaning, and connection to our users. Along our journey we have laughed and cried with you, and learned valuable lessons. And it is now inevitable to wind down the service to prioritize our work to serve you with better products and services.

It has been a long journey and we sincerely thank each one of you for your years of love and support for Path.

abjectio @knuthollund!quitterno 17 jun Message to users of quitter.no. I've decided to close this site on it's 4th birthday, that is 5th September -18. I do not have the energy and capacity to host the site anymore. Please "migrate" or find a new GNU Social home. I've decided to not handover the maintenance or data to anyone else - so please do not ask to get the data to host this site further. Thank you all for using Quitter this period and for following it's users. - A. !quitterno #gnusocial #quitter

Over the last twelve months we have been carrying out a complete technical review of the infrastructure and software we use to serve Wikispaces users. As part of the review, it has become apparent that the required investment to bring the infrastructure and code in line with modern standards is very substantial. We have explored all possible options for keeping Wikispaces running but have had to conclude that it is no longer viable to continue to run the service in the long term. So, it is with no small degree of nostalgia, that we will begin to close down later this year.

WikiSpace stopped working after a technical review informed the team that the infrastructure and code in accordance with modern standards were very important.

Through the end of November, 2018, you can download your chat history to you personal computer or device.

The Klout acquisition provided Lithium with valuable artificial intelligence (AI) and machine learning capabilities, but Klout as a standalone service is not aligned with our long-term business strategy. We appreciate the loyal Klouters out there who stuck with us all these years – keep influencing!

VersionEye was created in 2012 and allowed to monitor the project files of package managers on GitHub, Bitbucket or Stash. The project was stopped in October 2017 for various reasons:

Gratipay announced they would close at the end of 2017

Before its purchase by Macmillan Pronoun was preceded by Vook, a digital book publisher that combined text, video and links to the Internet and social media in unique applications available online and on mobile phones. Vook was founded by Bradley Inman, a serial Internet entrepreneur, and announced in April 2009. In November 2017, Macmillan announced the closing of Pronoun, with no new authors or books being accepted. Legacy writers were told they could continue their account activities with already submitted materials but that Macmillan expects to terminate distribution around mid-January 2018.(More).

das Klub was a US based social network centered around industrial music and industrial community that was shut down by the single admin without any proper announcement. Everything was deleted, no data export was possible, the site is gone.

Was the canonical site for the Atom syndication format and publishing protocol.

TiddlySpace is/was an online notebook that builds on the tried and tested "tiddler" model introduced by TiddlyWiki by moving tiddlers to the web. Details for exporting data were provided in a related Google Group

portablecontacts.net, the canonical site for the Portable Contacts standard, died in May 2016, zombie reincarnated in July 2016, and is a zombie site to this day (2018).

This Is My Jam

According to Google's Timetable. Unsure if actual shut down dates differed. This was only noticed after a tweet lamenting the takedown

2014-06-19 myOpenID.com finally disappeared according to Archive.org.

2013-12-01 HipGeo travel journal app that allowed people to track their travels and location. Site replaced with a WordPress installation with one post and a default comment. All permalinks from Google search results for the brand broken [78]. ??? profiles lost. Shutdown announcement: [79]

2013-11-05 Everpix photo content hosting silo announces shutdown, immediately goes "read-only", and says they will "email instructions to all Everpix users on how to download their photos".[80][81][82] [83]

2013-08-08 Lavabit Texas-based encrypted private email provider shut down due to its affiliation with being whistleblower Edward Snowden's email provider since 2010. Lavabit's founder Ladar Levison decided to shut down the service after a cost benefit analysis on whether to shut down the service or become "complicit in crimes against the American people". Lavabit, email service Snowden reportedly used, abruptly shuts down

2013-07-24 Snapjoy shut down after being acquired by Dropbox. article

2013-03-13 Blogtv.com shut down after purchase by YouTube and merged into YouNow.

2013-04-30 Posterous.com Thanks from Posterous after being acquired by Twitter

Yahoo Voice Phone In Out

Per Wikipedia, in 2007 August, Fuckedcompany.com's home page was changed to read

As of 2018-029, only the home page and http://fuckedcompany.com/servermon/ are returned for a site:fuckedcompany.com web search. All other attempts at loading various pages at that domain return a "403 Forbidden".

Fuckedcompany was a popular site-deaths (actual, impending, at-risk) tracking site near the end and after the first dotcom boom.